Carne Asada is one of my favorite Mexican recipes. It’s made with simple ingredients, easy to make, and it has the most delicious flavors. You can use this carne asada meat to make burritos, steak tacos, tortas, and even carne asada fries.

Living many years in San Diego allowed me to experience so much good food, and Carne Asada Burritos were a weekly occurrence, especially in college.

San Diego’s proximity to Baja California has influenced the Coastal Style of Mexican food that I’ve grown to love. The ingredients are fresh, the flavors are bold and the fish tacos and carne asada street tacos are second to none.

Southern California is also where Carne Asada Fried Originated. You may also see a California Style Carne Asada Burrito that contains French fries inside the burritos. Both of these So Cal dishes are not to be missed.

If you've been hanging out with me for a while you already know that tacos are my jam. I could eat tacos every single day. Seriously!!

Growing up in San Diego, I had a front-row seat to what are arguably the best tacos on the planet. San Diego's Mexican food scene is heavily influenced by Baja California and the fresh flavor that come with it.

My daughter actually cut her teeth on carne asada meat when she was a baby. Not joking!

I've lived in the Bay Area now for about 12 years and I still haven't been able to find a carne asada taco that comes close to the ones that I've had in Chula Vista.

Anyway....out of sheer desperation, I've had to learn how to make carne asada the way I know carne asada should taste. And now I'm going to share it with you.

What is Carne Asada?

Carne asada starts with a flavorful marinade, and then the steak is seared on a hot grill.

If you’ve ever been to a carneceria, you will find that you can buy carne asada meat at the counter. You’ll find it thinly sliced and marinated, or you can buy the meat for carne asada that is cut but without a marinade.

The Elements of a Perfect Taco

To find the ultimate taco experience you need the perfect combination of fresh ingredients.

What You’ll Love About This Carne Asada Recipe

PIN THIS RECIPE FOR LATER

This authentic carne asada recipe starts with beef and a carne asada marinade made with citrus juices, spices, fresh cilantro, and garlic.

In my opinion, the best carne asada is made with thinly sliced flap steak.

Beef flap meat is an inexpensive cut of meat with a rich beefy flavor. This cut of meat should be cooked to medium temperature. It tends to be mushy or chewy when its cooked too rare.

You may see this cut steak called a bavette or a sirloin tip. A flap steak is cut from the sirloin bottom butt. It's near where the tri-tip is cut from.

This cut of meat has a rough texture that allows it to take on marinades extremely well. It's often used to make grilled kabobs.

Flank steak is a very lean all-purpose beef cut. It's commonly used to make carne asada. However, because it's so lean it can be tough if it's overcooked or sliced too thick.

This cut comes from the abdominal region of the cow and has a less intensely beefy flavor when compared to flap steak or skirt steak. Flank is my least favorite cut of beef to use with this recipe.

If you do choose to use a flank steak make sure to sear it on a super hot grill and cook it on the rarer side. Make sure to slice the meat super thin so that it's easy to chew.

Skirt steak is a think long cut of beef that comes from the diaphragm of the steer. This cut is located just under the rib cage. This cut of beef has a pronounced grain and an intense beefy flavor.

I like to use this cut of beef if I am going to pan-sear the carne asada instead of grilling it. You want this cut of beef to be rare so cook it in an extremely hot pan. You just want to quickly sear the outside.

🤓 Geek Wisdom: Ask your butcher to cut your steak thin. They have the sharpest knives and then you won't have to worry about it later.

Marinating the steak before grilling has two functions. It helps to tenderize the meat and it adds a delicious flavor to the meat. It's the best way to season carne asada.

How To Cook Carne Asada

Traditionally, carne asada is grilled. But, what if you don't have a grill? Luckily you can still cook carne asada in a skillet on your stovetop.

Cooking Carne Asada On The Grill

Cooking Carne Asada On The Stove

To slice carne asada, use a sharp knife and slice against the grain.

In my opinion, tacos should be simple. All you need is a really good warm tortilla, perfectly seasoned meat, a little cilantro and onion, and some simple guacamole.

Leftover carne asada freezes really well so don't be afraid to make a big batch and have more tacos next week.

How to store leftover carne asada

Leftover meat can be stored in the fridge in an airtight container for up to a week.

How to freeze leftover carne asada

I like to freeze carne asada using a freezer bag. Add up to 3 cups into the zip-top freezer bag and press as much air out as you can. Seal and freeze for up to 4 months.

How to reheat carne asada

The best way to reheat carne asada is in a skillet.

Heat the skillet over medium-high heat and add about 1 cup to the hot skillet. Toss in the skillet until the meat is fully reheated. The safe temperature for meat is 165℉.

What cut of meat is carne asada?

Most carne asada recipes call for flank or skirt steak.

However, carne asada translates into grilled meat. I typically use thinly sliced sirloin when I make carne asada.

How much carne asada per person?

Usually, a half-pound of meat per person is a good estimate. You will usually have a few people that eat more and some that eat less.

Planning for a half-pound per person is usually a pretty good target. Always estimate on the high side so you don't run out.

How to marinate carne asada.

Marinate carne asada in a nonreactive container like glass or plastic.

The easiest way to marinate carne asada is to add the marinade to a gallon-sized freezer bag and then add your meat to it. Seal it and let is sit in the fridge for up to 48 hours before grilling it.

What else can you make with carne asada meat?

What To Serve With Carne Asada Tacos

Of course, tacos need all of the usual suspects like pico de gallo, guacamole, and corn tortillas.

I also love having fresh limes, taco slaw, and diced cilantro and onions. And don't forget the Mexican Street Corn, it's so good and the perfect side dish to serve with tacos. 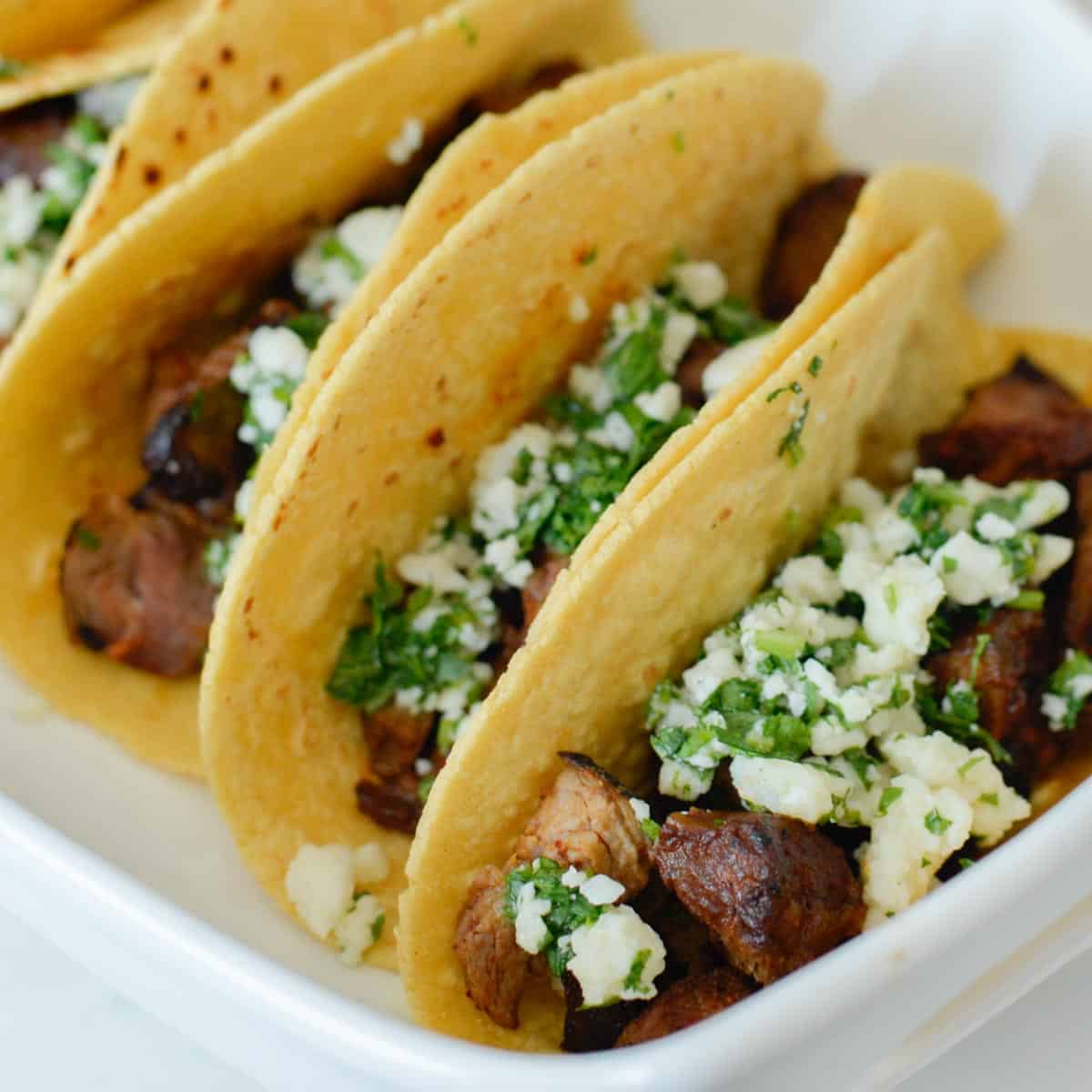 Other Toppings and Stuff

How to Marinade Carne Asada

How To Grill Carne Asada

This website uses cookies to improve your experience while you navigate through the website. Out of these, the cookies that are categorized as necessary are stored on your browser as they are essential for the working of basic functionalities of the website. We also use third-party cookies that help us analyze and understand how you use this website. These cookies will be stored in your browser only with your consent. You also have the option to opt-out of these cookies. But opting out of some of these cookies may affect your browsing experience.
Necessary Always Enabled
Necessary cookies are absolutely essential for the website to function properly. This category only includes cookies that ensures basic functionalities and security features of the website. These cookies do not store any personal information.
Non-necessary
Any cookies that may not be particularly necessary for the website to function and is used specifically to collect user personal data via analytics, ads, other embedded contents are termed as non-necessary cookies. It is mandatory to procure user consent prior to running these cookies on your website.
SAVE & ACCEPT
178 shares
178 shares