Maple and Mustard Brown Sugar Glazed Ham is the perfect Holiday Centerpiece. This easy ham glaze is one that I've made over and over! It is savory-sweet and comes out perfect every single time! Serve it with your favorite holiday sides.

Growing up, we only had ham on special occasions like Easter or Christmas! It was always a special treat.

These days whenever I bake a ham, I wonder why I waited so long.

Not only do you get a fantastic dinner when you bake a ham, but the leftovers are [top-notch].

With an average-sized spiral sliced ham, which is usually at least four pounds, you'll end up with enough ham leftover for sandwiches all week.

Then you have the ham bone. In my book, this is where the real money is. There's nothing better than a pot of ham and bean soup. Or try my Split Pea Soup.

My mom made this every year the day after Easter. It was a simple soup with nothing but dried navy beans and a ham bone.

Everything would go into the slow cooker and cook overnight, or sometimes she might start the soup in the morning. We almost always had ham and bean soup the next night for dinner.

She would make a batch of her Skillet Cornbread and serve the bean soup with diced white onions and tabasco.

It is these kinds of memories that remind me of why I love cooking.

What you'll love about this recipe.

Don't forget to save your ham bone for making a nice batch of Ham and Bean Soup. If you aren't coing to use it right now you can freeze it for later.

How to make a glaze for ham

Simply add the mustard, light brown sugar, maple syrup, pineapple juice, and spices to a saucepan. Bring the mixture to a boil and then reduce the heat to a simmer. Let the mixture simmer for about 10 minutes, OR until it has reduced by one-third.

How to cook a precooked ham with glaze

Spiral cut ham sometimes comes with a packet of glaze. It is fine to use that, but I highly recommend making your own Mustard Maple Ham Glaze.

What to Serve with Spiral Cut Ham 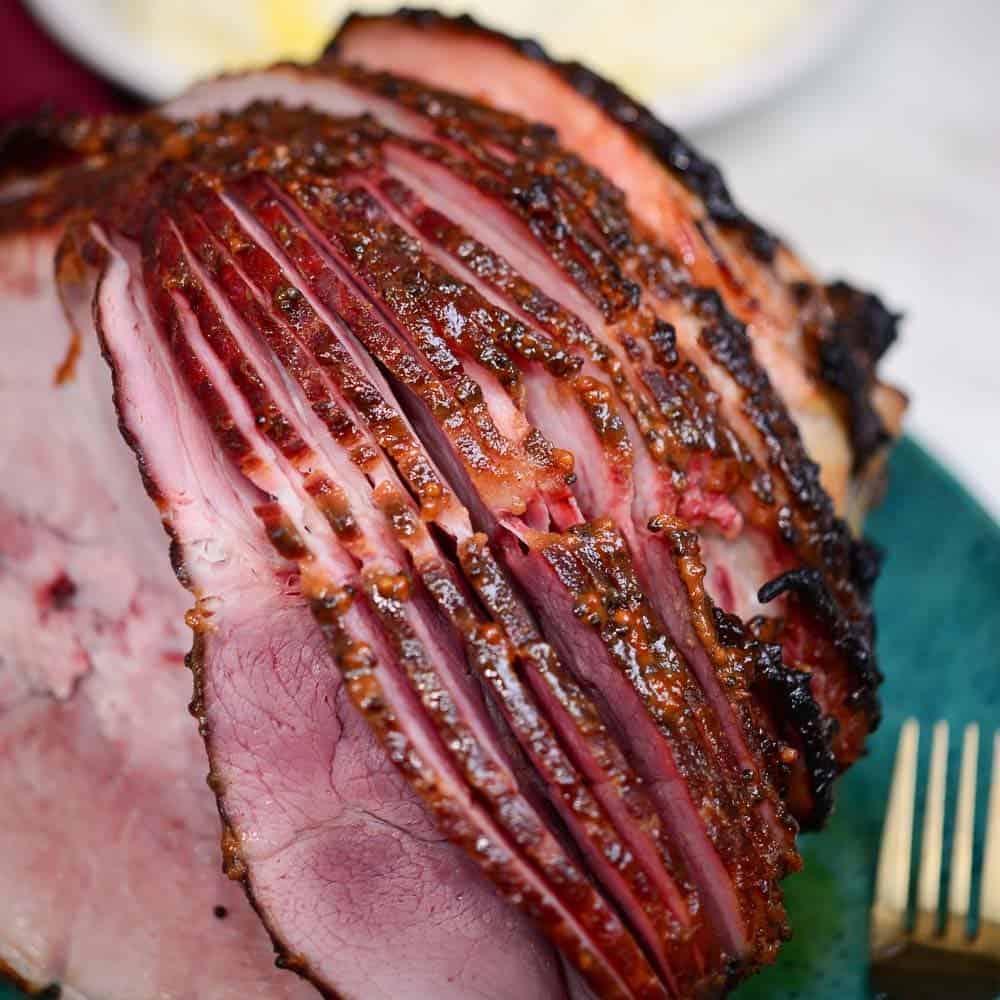 Laura Reigel
Maple and Mustard Brown Sugar Glazed Ham is the perfect Holiday Centerpiece. This easy ham glaze is one that I've made over and over! It is savory-sweet and comes out perfect every single time! Serve it with your favorite holiday sides.
PRINT PIN SAVE SAVED
Prep Time 15 mins
Cook Time 2 hrs
Course Main Course
Cuisine American, Easter, Holiday
Servings 12
Calories 289 kcal

This website uses cookies to improve your experience while you navigate through the website. Out of these, the cookies that are categorized as necessary are stored on your browser as they are essential for the working of basic functionalities of the website. We also use third-party cookies that help us analyze and understand how you use this website. These cookies will be stored in your browser only with your consent. You also have the option to opt-out of these cookies. But opting out of some of these cookies may affect your browsing experience.
Necessary Always Enabled
Necessary cookies are absolutely essential for the website to function properly. This category only includes cookies that ensures basic functionalities and security features of the website. These cookies do not store any personal information.
Non-necessary
Any cookies that may not be particularly necessary for the website to function and is used specifically to collect user personal data via analytics, ads, other embedded contents are termed as non-necessary cookies. It is mandatory to procure user consent prior to running these cookies on your website.
SAVE & ACCEPT
219 shares
219 shares