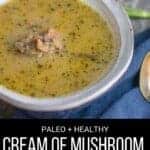 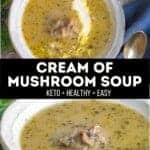 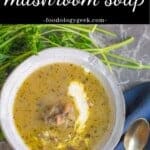 Dairy free Cream of Mushroom soup is a nourishing and comforting bowl of deliciousness. Made with rich bone broth and packed with flavor. Use this soup as a substitute for the traditional can of cream of mushroom soup. My Clean Green Bean Casserole recipe isn't the same without it!

I remember growing up with all of the Campbell's Cream of Mushroom Soup recipes.

Do you remember those? If you grew up in the 80s like me you probably have a recollection.

Even when I first moved out on my own and was cooking for myself for the first time, I often make the chicken breast recipe that called for a can of Campbell's cream of mushroom soup.

Why settle for canned soup when it is so easy to whip up this paleo mushroom soup?

This recipe is a gluten-free and dairy-free mushroom soup recipe but I love serving it with a little bit of creme fraiche. If you are avoiding dairy then just leave it out.

To make this mushroom soup vegan leave out the bone broth and used a vegetable broth instead.

This is an easy Mushroom Soup Recipe

This soup is really satisfying all on its own but you can also use it as a substitute for cream of mushroom soup. 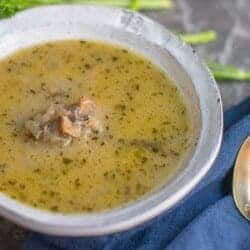 Make it Vegan: Substitute the chicken broth for vegetable broth. If you don't like the texture of the mushrooms in chunks (or if you simply prefer a uniformly smooth soup), throw the finished soup into a blender or use an immersion blender to break up the mushroom pieces.