These are the BEST cinnamon rolls that you're ever going to make. They're soft and fluffy, full of gooey cinnamon roll filling, and topped with cream cheese frosting. Homemade cinnamon rolls are a real treat for breakfast or brunch. These are our favorite Christmas morning tradition.

In our house, we always have our big holiday dinner on Christmas Eve. That way, we can get to bed and wake up early to open presents, stuff our faces again, and then take an afternoon nap.

Christmas Eve dinner always includes a batch of my Aunt Donna's Dinner Rolls. These homemade rolls are the softest, fluffiest, most fantastic dinner rolls ever!

Why am I even talking about dinner rolls in a cinnamon roll recipe post?

Okay, I'm getting to that. The cinnamon roll dough that is used in this recipe is the same dough I use to make dinner rolls.

In the morning, when we woke up, she would pull them out of the fridge, let them warm up for a bit, and then put them into the oven.

She was able to enjoy sipping her coffee and enjoy the morning while the house filled up with the smell of cinnamon.

What You’ll Love About This Recipe

If you like Cinnabon, then you are going to love this cinnamon rolls recipe.

The cinnamon roll dough is soft and fluffy and can be used to make various sweet rolls, and you can also use this dough to make savory rolls.

This is an enriched dough (made with sugar, butter, and eggs), like a brioche. It needs to be beaten well, and the long beating time of the eggs and sugar allows the sugar to dissolve into the dough.

The long beating time of the flour allows the gluten proteins to make strong bonds which enables the dough to hold air as it rises. This step is essential for getting a well-risen roll.

While the dough is rising for the first time, make the cinnamon and sugar filling.

You can wait to make the icing for the cinnamon rolls until they are cooling. Make sure that your ingredients are at room temp when you're ready to go.

How to Assemble The Cinnamon Rolls

PRO-TIP: The cinnamon rolls can be baked immediately after the second proof, OR they can be stored in the refrigerator overnight and baked the next morning.

How to Make Overnight Cinnamon Rolls

If you want to prepare this recipe for cinnamon rolls the night before and bake them in the morning, here's how!

Keep in mind that rising time will vary depending on temperature.

Pecan Sticky Buns: Add about half a cup of chopped and toasted pecans to the filling.

Orange Sweet Rolls: This incredible variation takes a few substitutions. Use ½ cup of orange juice and ½ cup of water or milk for the liquid in the dough. You will want to fill these with butter, sugar, a drop of vanilla extract, and two tablespoons of orange zest for the filling. You'll substitute this filling for the cinnamon filling.

Pineapple Rolls: I have an entire post of these Hawaiian Pineapple Sweet Rolls. Trust me; you do not want to miss out on this recipe.

Glazed Cinnamon Rolls: If you're not into the heavy cream cheese frosting and like a lighter glazed cinnamon roll, no problem. Add milk, or even orange juice, to the powdered sugar. Add about three tablespoons to start, and then continue to add more liquid until the glaze is the consistency of thick honey. I like to add icing to them while they are still warm.

Other Baking Recipes That You’ll Love 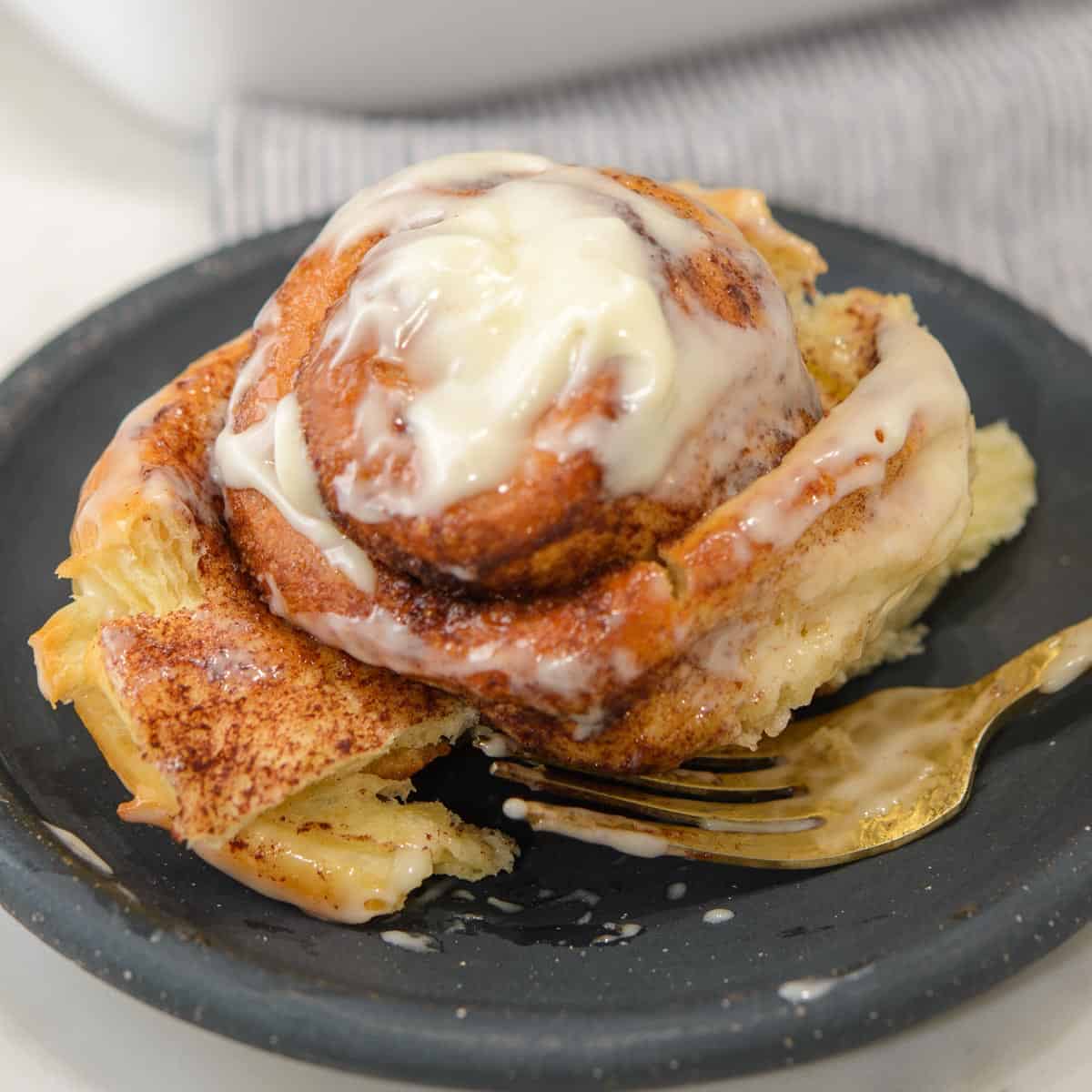 Make-Ahead: Make these the night before and have them ready in the morning.  To make these cinnamon rolls the night before, cut the cinnamon rolls and place them into a pre-greased cake pan. Cover tightly with plastic wrap and place in the refrigerator. In the morning, take them out of the refrigerator to rise. Preheat oven to 375℉.  Pro tip: I usually place a kitchen towel over them and place the pan on top of my oven while it is preheating. The warmth of the oven heating up allows them to rise pretty quickly.  Lighter Cinnamon Roll Icing: Mix the powdered sugar with milk or orange juice. I just use a fork to mix. You will want the consistency to be like honey.  Variations Pecan Sticky Buns: Add about a half of a cup of chopped and toasted pecans to the filling. Orange Sweet Rolls: Just a few substitutions. Use half a cup of orange juice and half a cup of water or milk for the liquid in the dough. For the filling, you are going to want to fill these with butter, sugar, and 2 tablespoons of orange zest. You'll substitute this filling for the cinnamon filling. For the frosting add orange juice and orange zest or orange extract.  Pineapple Rolls: I have an entire post of these Hawaiian Pineapple Sweet Rolls. Trust me, you do not want to miss out on this recipe. Glazed Cinnamon Rolls: If you're not into the heavy cream cheese frosting and like a lighter glazed cinnamon roll, no problem. Simply add milk or even orange juice to the powdered sugar. Add about 3 tablespoons to start and then continue to add more liquid until the glaze is the consistency of a thick honey. I like to glaze the cinnamon rolls while they are still warm.

This website uses cookies to improve your experience while you navigate through the website. Out of these, the cookies that are categorized as necessary are stored on your browser as they are essential for the working of basic functionalities of the website. We also use third-party cookies that help us analyze and understand how you use this website. These cookies will be stored in your browser only with your consent. You also have the option to opt-out of these cookies. But opting out of some of these cookies may affect your browsing experience.
Necessary Always Enabled
Necessary cookies are absolutely essential for the website to function properly. This category only includes cookies that ensures basic functionalities and security features of the website. These cookies do not store any personal information.
Non-necessary
Any cookies that may not be particularly necessary for the website to function and is used specifically to collect user personal data via analytics, ads, other embedded contents are termed as non-necessary cookies. It is mandatory to procure user consent prior to running these cookies on your website.
SAVE & ACCEPT
1716 shares
1716 shares