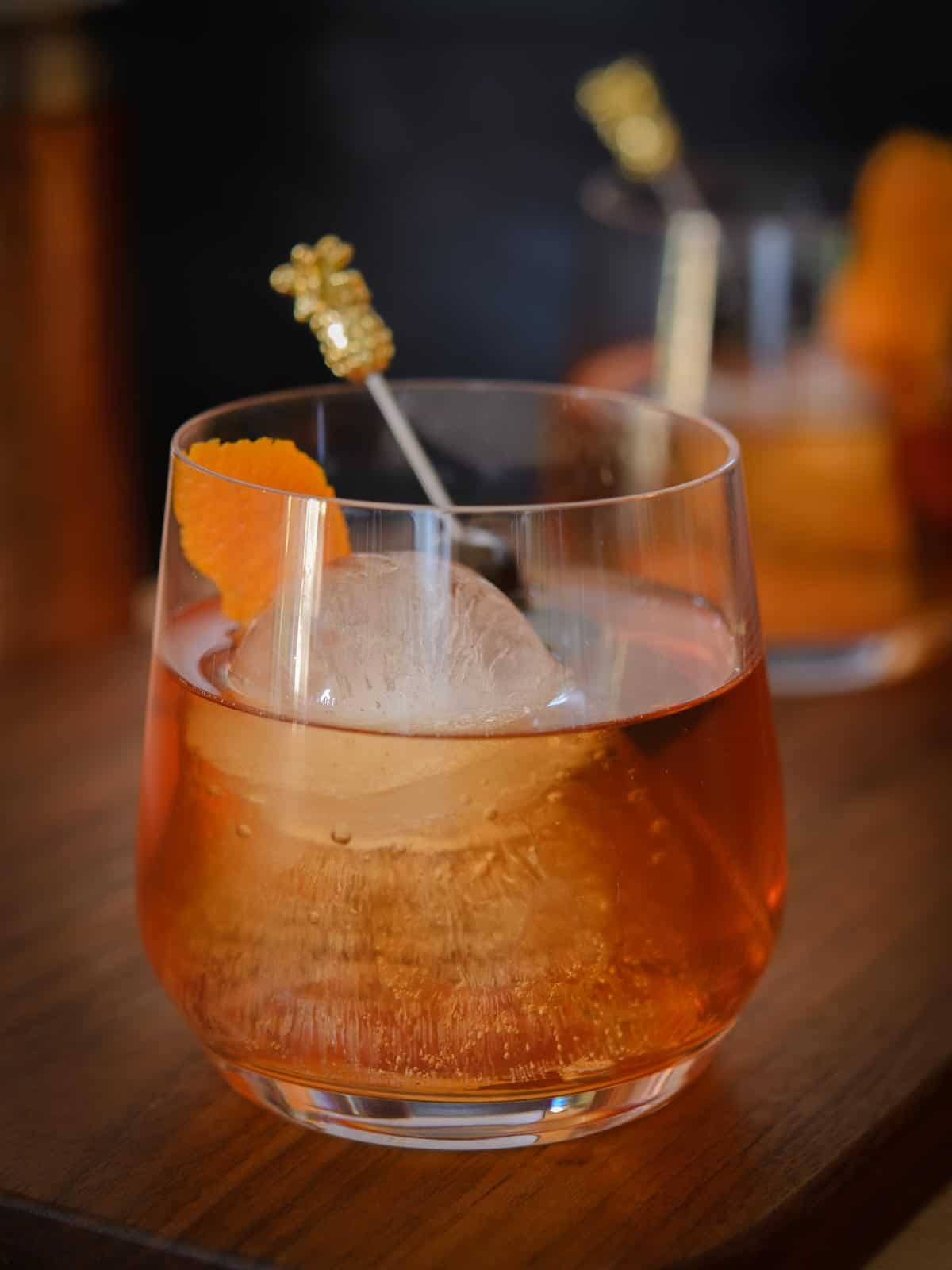 An Old Fashioned cocktail is a bourbon cocktail served over ice in an old-fashioned double glass. This version is made with simple syrup, and it produces a consistently delicious drink every single time.

This whiskey cocktail recipe is smooth, slightly sweet, and has a hint of orange zest flavor.

The history of this cocktail begins in 1880, in Louisville, Kentucky, at a Gentleman's Club named the Pendennis Club. James E. Pepper, a Bourbon aficionado, supposedly brought the original Old Fashioned Recipe to the Waldorf Astoria.

Later on, during prohibition, it's rumored that an "Old-Timer" was given a sugar cube in a glass splashed with a few dashes of Angostura bitters. The bartender then handed him a bottle of whiskey and told him to pour his drink.

If you don't already have simple syrup, you can make some; it only takes a few minutes.

For cocktails, I use what's referred to as rock candy syrup or rich simple syrup, which has a 2:1 ratio of sugar to water.

How to make rock candy syrup

PRO-TIP: Turbinado sugar can be used to make simple syrup, which gives the syrup and more caramel-like flavor. Turbinado sugar will take a little bit longer to dissolve.

How to peel citrus for cocktails

The easiest way to peel citrus when you are making cocktails is with a y-peeler.

Kuhn Rikon makes the best brand that I've found. This peeler is sharp and inexpensive. These peelers won't last forever, but they're cheap enough to replace when they do get dull. Amazon sells them in a 3-pack.

A y-peeler will give you a clean strip of the orange peel without any of the pith. I use these peelers with I make my homemade limoncello or arancello.

Craft ice cubes are large format ice cubes that are used in cocktails. Sometimes they are spheres of ice or large squares. The large cubes melt slower, which prevents the cocktail from being diluted too quickly with melted ice.

You can find all sorts of craft ice trays in a variety of shapes. I own a sphere ice mold, a large ice cube mold, and two Darth Vadar ice molds. (I'm not nerdy at all 😜)

How to make an Old Fashioned

The best Old Fashioned recipe is stirred and not shaken. Stirring this cocktail will ensure that it stays clear and has a smooth mouthfeel.

For an extra fancy twist, you can warm the orange peel with a lighter and then mist the orange oil from the peel over the top of the cocktail.

This original version of an old-fashioned was built in the glass by muddling a sugar cube, Angostura bitters, and water. Add whiskey and ice, stir and then garnish with an orange.

Later versions called for muddling a thin slice of orange (peel and all) and a Luxardo cherry along with the sugar cube and bitters.

In my opinion, they are all equally delicious. This version is simple and easy to make.

If you're thirsty for more cocktail recipes, try one of my Hawaiian cocktails or a sweet Lemon Drop Martini. 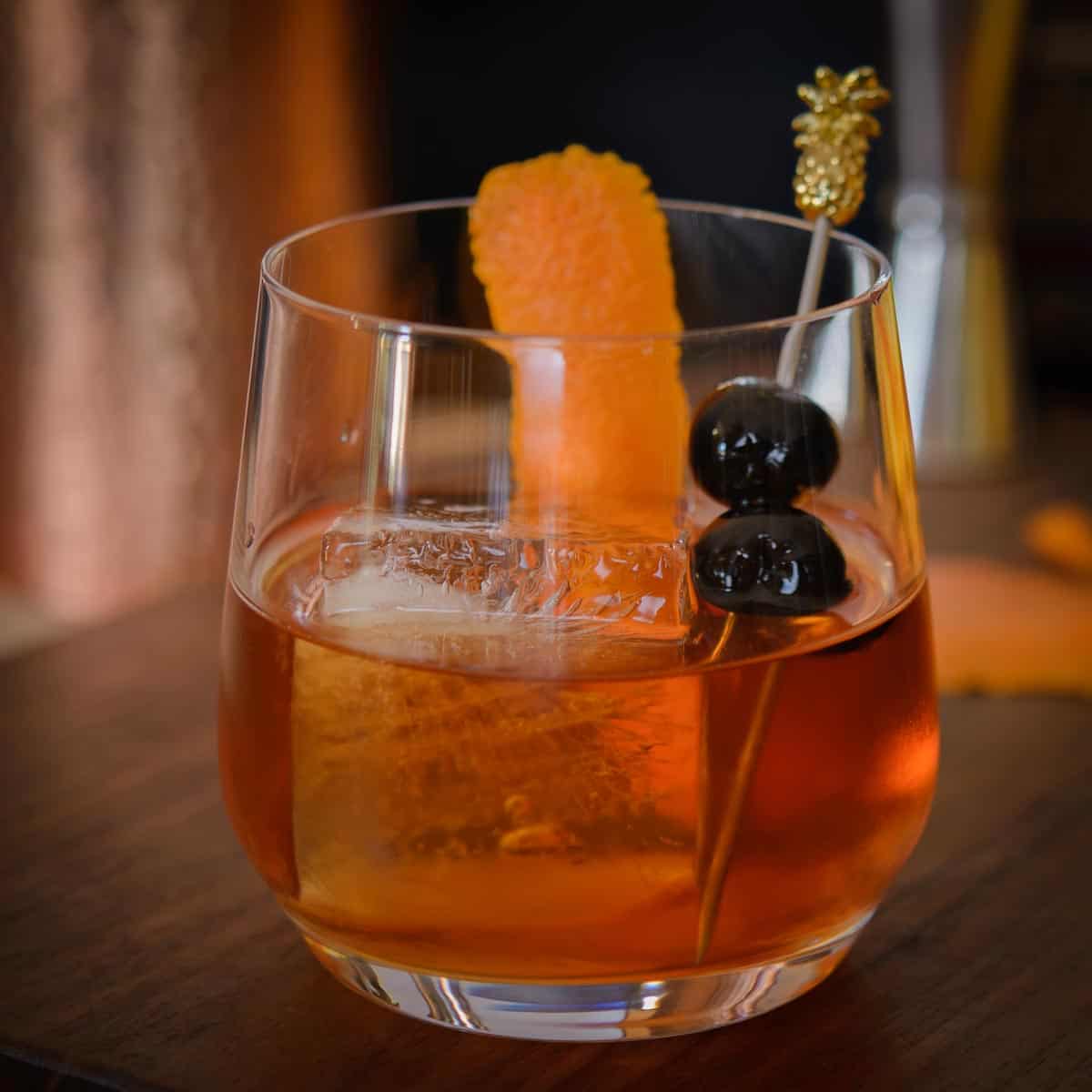 This website uses cookies to improve your experience while you navigate through the website. Out of these, the cookies that are categorized as necessary are stored on your browser as they are essential for the working of basic functionalities of the website. We also use third-party cookies that help us analyze and understand how you use this website. These cookies will be stored in your browser only with your consent. You also have the option to opt-out of these cookies. But opting out of some of these cookies may affect your browsing experience.
Necessary Always Enabled
Necessary cookies are absolutely essential for the website to function properly. This category only includes cookies that ensures basic functionalities and security features of the website. These cookies do not store any personal information.
Non-necessary
Any cookies that may not be particularly necessary for the website to function and is used specifically to collect user personal data via analytics, ads, other embedded contents are termed as non-necessary cookies. It is mandatory to procure user consent prior to running these cookies on your website.
SAVE & ACCEPT
6 shares
6 shares