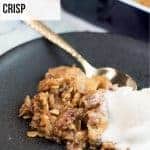 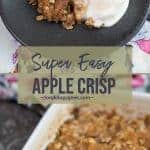 This Easy Apple Crisp Recipe is made with simple ingredients in the old fashioned way. All you need are fresh apples, oats, flour, sugar, and butter! You end up with a sweet apple cinnamon filling topped with a buttery oat crumble.

Are there any special recipes in your life?

Why do these two stand out? My great-grandmother used to bring sticky buns to EVERY meal…yes, even dinner! These were the most amazingly gooey, sinfully wonderful buns! Even as a kid, it seemed just decadent to eat them with dinner.

These buns were always warm and gooey, straight from the oven – even if we weren’t at her house.

It was a raised yeast dough. She never measured the ingredients, nor was the recipe written down. She could make them with her eyes closed. My grandmother learned how to make them, as did my mother; but none were as good as Minta’s. (My mom put nuts and raisins in her version which, as kids, we found blasphemous!)

Sadly, this recipe was forever lost...

We'd always talked about getting everyone together for a lesson with Minta. Regretfully, we never got around to it. Minta died when I was in college. My mother and grandmother also passed some years later. I so wish we’d made the effort. Not only would the recipe persist, but we would have had a blast doing it.

I’m happy to report that we did better with Gracie’s Apple Goodie recipe…partly as a result of missing the opportunity with Grandma Minta’s Sticky Buns, and because it was already written down.

You can even enjoy Gracie’s 'Apple Goodie' (Crisp) recipe here.

This recipe is special to me for a number of reasons.

First, it really celebrates good apples. Second, it reminds me of two very special women – Gracie, and my mother - in their own handwriting. Gracie was a warm loving woman who used to take care of me.

My mother was a super-intelligent, confident woman who liked to lead with her viewpoint on a situation.

I LOVE that my mom has made annotations all over Gracie’s original recipe – to make it even better.

Mom could never leave well enough alone!  She is bossy even in writing!

Cooking is more than following a recipe.

Vegan and Dairy Free Adaption: Use vegan butter in place of dairy butter.

This website uses cookies to improve your experience while you navigate through the website. Out of these, the cookies that are categorized as necessary are stored on your browser as they are essential for the working of basic functionalities of the website. We also use third-party cookies that help us analyze and understand how you use this website. These cookies will be stored in your browser only with your consent. You also have the option to opt-out of these cookies. But opting out of some of these cookies may affect your browsing experience.
Necessary Always Enabled

Any cookies that may not be particularly necessary for the website to function and is used specifically to collect user personal data via analytics, ads, other embedded contents are termed as non-necessary cookies. It is mandatory to procure user consent prior to running these cookies on your website.