Pho soup is a Vietnamese Beef Noodle Soup that is delicious and conforting. This flavorful and healthy soup recipe is easy to make. Now you can make your favorite beef pho soup at home.

Making this Vietnamese noodle soup at home is easier than you might think.

You guys know that I'm always on the quest for recipes that capture true authentic flavor. I want it to be so good that it tastes like it came straight from bà's kitchen.

I used the recipe featured in Eat Real Vietnamese Food by Lien Nguyen. Lien's recipe is an easy pho recipe. It takes time but the steps are super simple.

This cookbook is a collection of traditional Vietnamese recipes that are fantastic! I highly recommend picking up a copy.

I love finding recipes that make me feel like I have an inside seat in someone's family kitchen. This book definitely checks that box.

If you're asking this, then you may never have had a bowl of beef pho.

What you're going to love about this soup!

Beef Pho Soup is all about the broth. Having a flavorful beef pho broth is essential to making sure that that this soup is delicious. Vietnamese Pho soup is such a simple thing to make, but there are a few techniques that you'll need to make it perfect!

What you'll need to make Vietnamese noodle soup at home

The ingredients that you need to make pho soup are pretty simple:

The foundation of this traditional Vietnamese soup is a stock made from either short ribs or beef knucklebones. The aromatic spices are what then give phó it's distinctive flavor.

For the pho broth:

Optional: You can also add in brisket. Pho can be served with rare steak, and/or brisket.

Pho is typically served with thin rice noodles. At the pho place near me, you can also order it with egg noodles.

You will see rice sticks in the Asian section of the grocery store. They are sometimes called rice vermicelli or rice sticks.

I like to use the thin rice sticks but you can also use a medium or wide noodle.

Phó is typically served with a helping of bean sprouts, fresh Thai basil, lime wedges, and jalapeños on the side. These fresh veggies are added to your bowl of soup as you eat it. Yum!

Although it is debated whether or not this is traditional, for me an absolutely necessary part of eating phó is the inclusion of an obscene amount of Sriracha Hot Sauce.

I like my pho broth bright orange with sriracha and my lips burning. Of course, this is personal preference.

How to make pho soup

Phó should have a nice clear broth that tastes clean and fresh while offering a rich beef flavor that is infused with subtle spices.

Assembling a bowl of pho soup

The thinly sliced steak is cooked in the steaming hot broth. I've found the best cuts of steak to use for pho tai are beef filet or sirloin.

The steaming hot broth cooks the steak to a rare to medium-rare temperature.

Raw beef that is sliced exceptionally thin is added to the bowl along with a few sliced onions.

PRO-TIP: To slice extra thin steak, freeze the meat for about 30 minutes before slicing. Freezing firms up the meat and makes it easy to slice paper thin.

How do you pronounce pho?

Pho is pronounced as FA.

Is pho healthy to eat?

YES. Pho is a nutrient-rich soup made of bone broth, lean beef or chicken, and fresh vegetables.

What is the difference between Ramen and Pho?

Ramen is typically made with a rich pork broth and egg noodle. Pho is made with a clear beef or chicken bone broth and rice noodles.

What is Pho Tai?

Pho Tai is the version of Pho that contains beef broth and rare steak.

Phó Gá (chicken pho) is one of my favorite versions of chicken noodle soup. Once you give the traditional beef version a try, the chicken version should be next on your list.

More of my favorite Asian Noodle Recipes and Sides

Noodle Bowls (with Spicy Shrimp)
This noodle bowl is made with a combination of stir-fried vegetables and crisp fresh vegetables. This combo paired with spicy noodles and shrimp makes for an easy weeknight dinner that's always better than take-out.
SEE THE RECIPE PIN FOR LATER 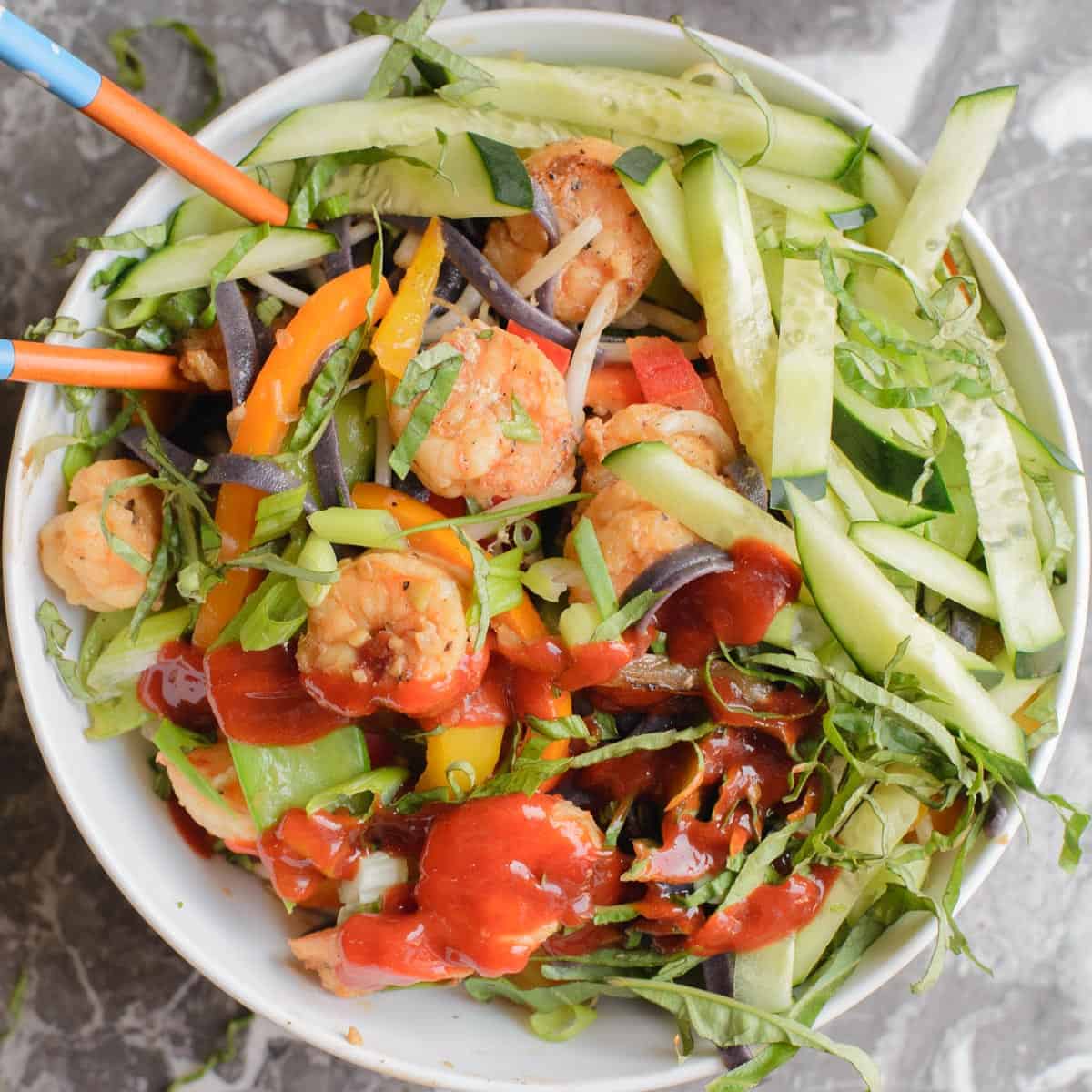 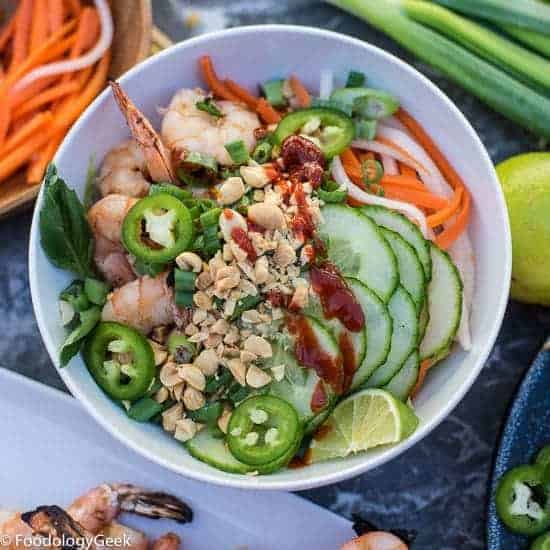 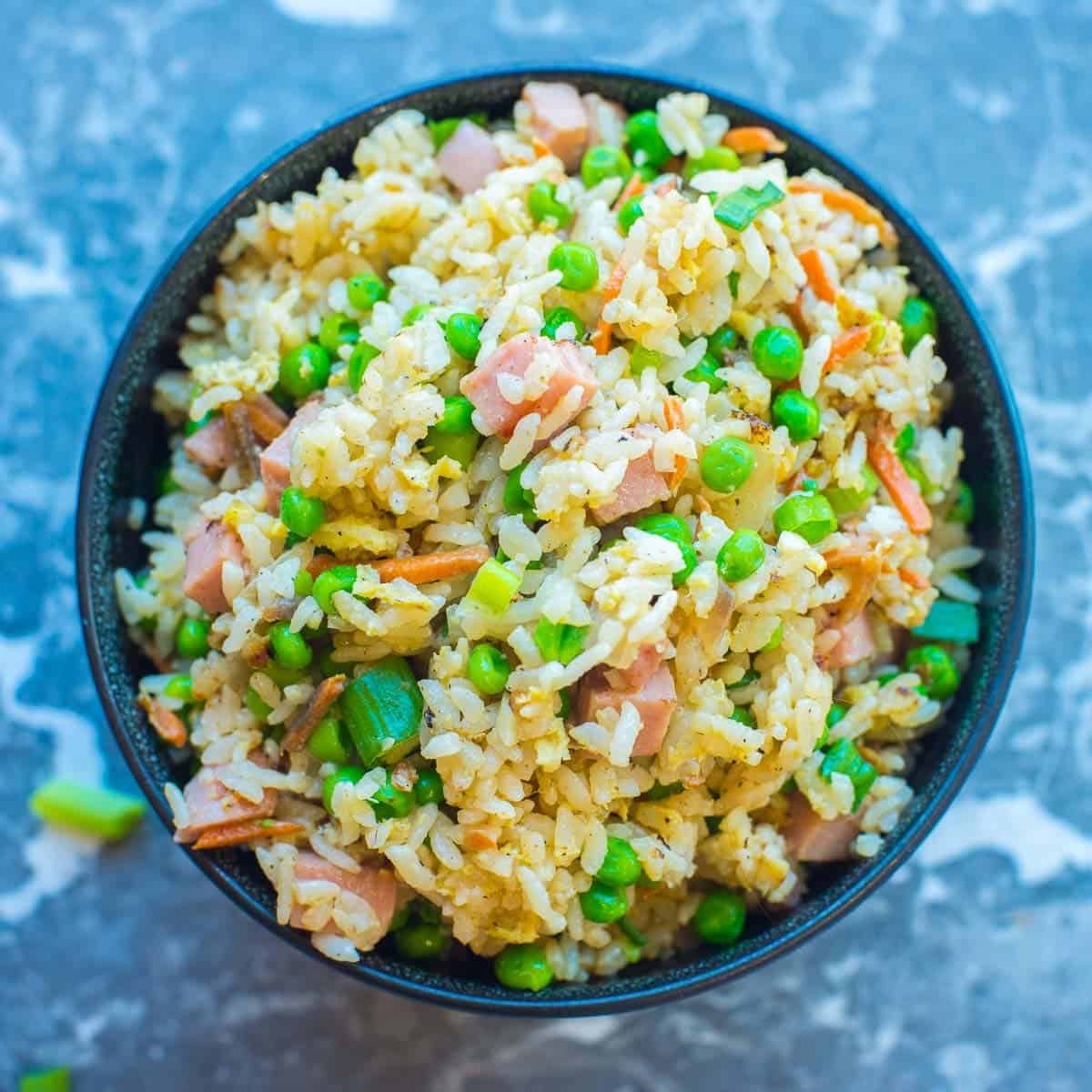 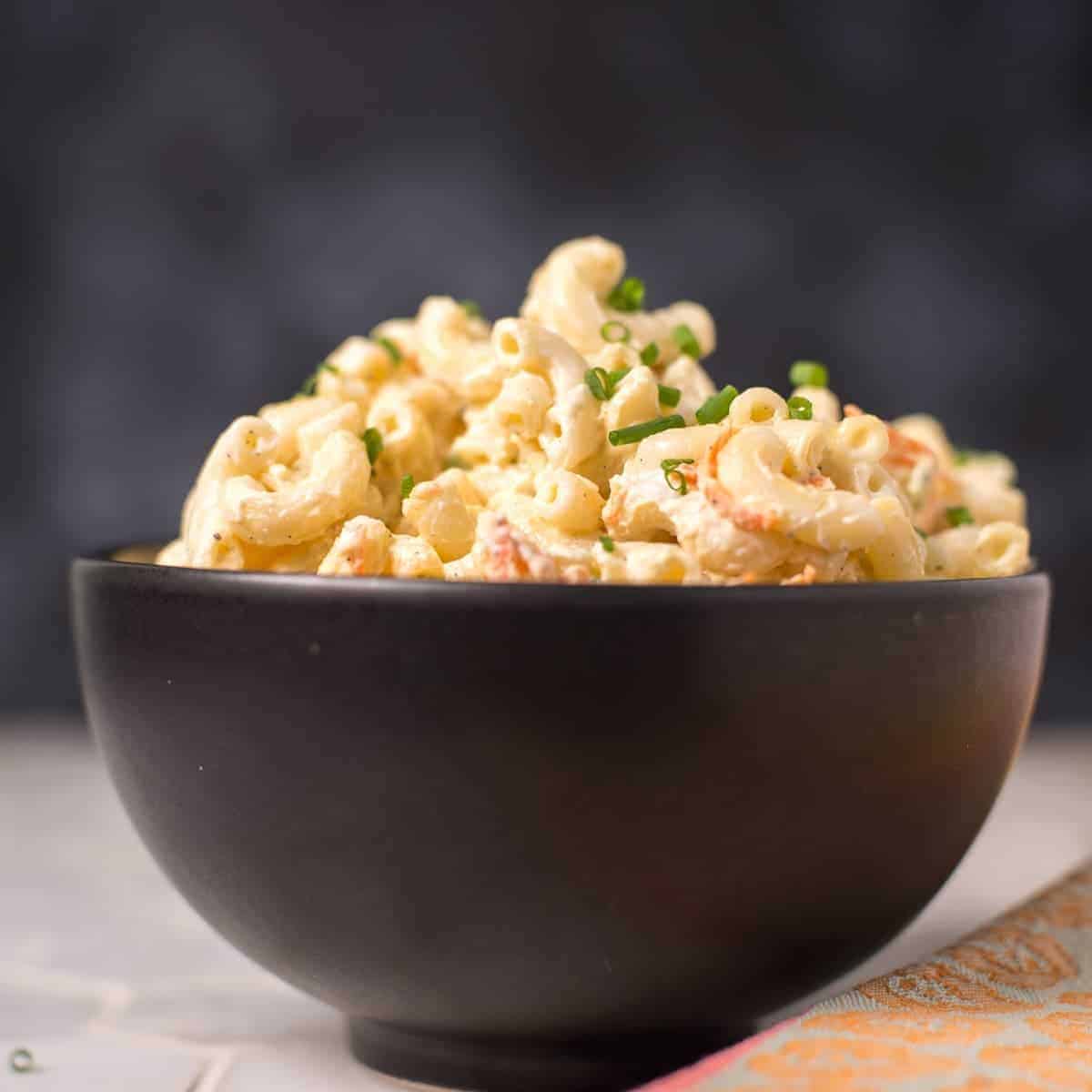 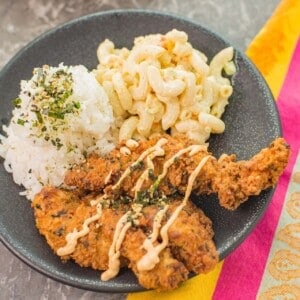 ➽ Did you make this recipe? I love to see what's going in your kitchen. Show me what you're cooking. 🍳 Tag me @foodologygeek on your favorite social channel! Facebook, Instagram & Pinterest. If you loved ❤︎ this recipe, please leave a 5 ★ review and a comment! 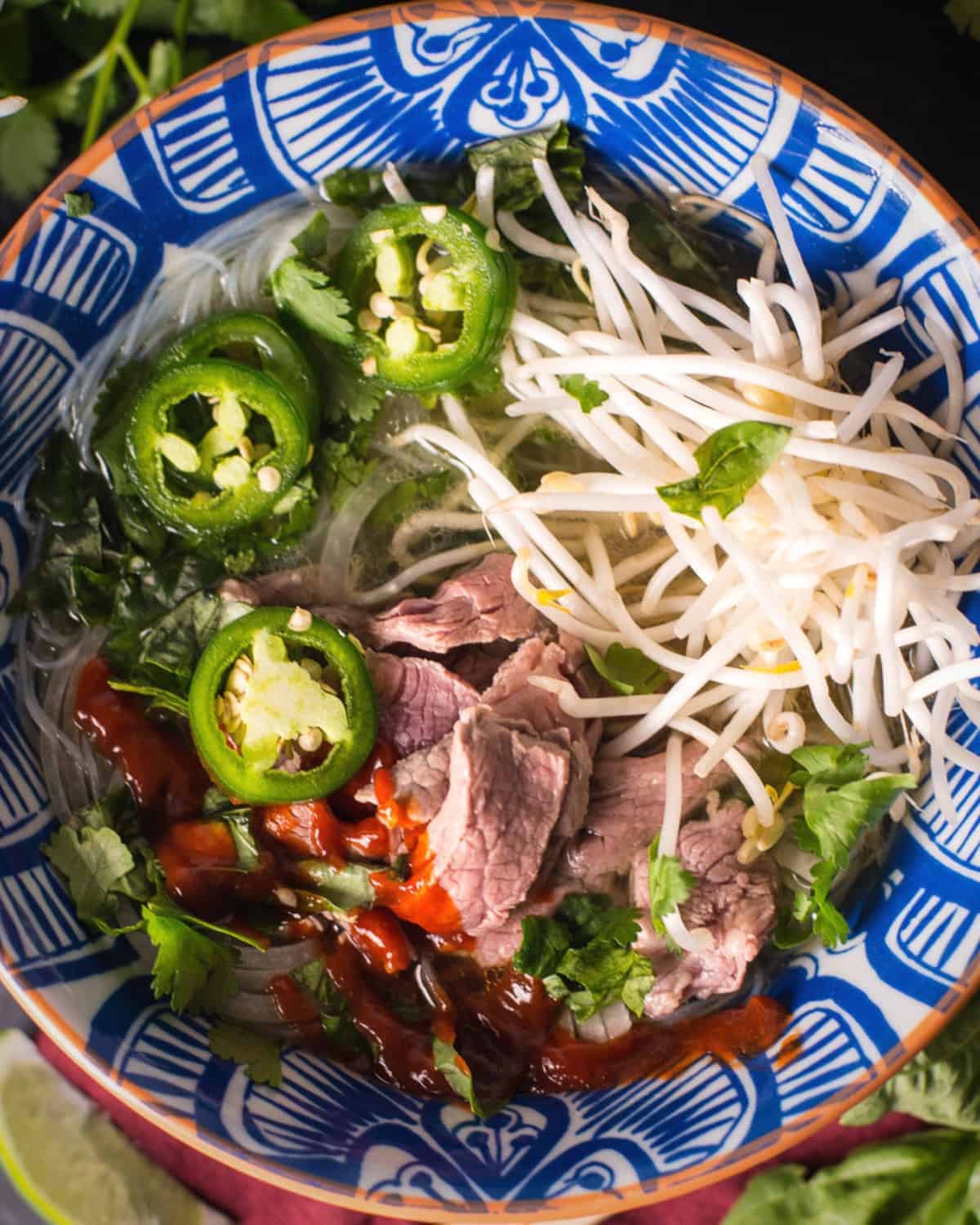 Laura Reigel
Vietnamese Beef Noodle Soup. Making Pho at home is easy and this Pho recipe is so good that I honestly think it's one of the best bowls of beef pho, I've ever had. The spices are spot one and the broth tastes rich and super fresh. So Yummy!!!
PRINT PIN
Prep Time 20 mins
Cook Time 2 hrs
Total Time 2 hrs 20 mins
Course Soup
Cuisine Vietnamese
Servings 6

This website uses cookies to improve your experience while you navigate through the website. Out of these, the cookies that are categorized as necessary are stored on your browser as they are essential for the working of basic functionalities of the website. We also use third-party cookies that help us analyze and understand how you use this website. These cookies will be stored in your browser only with your consent. You also have the option to opt-out of these cookies. But opting out of some of these cookies may affect your browsing experience.
Necessary Always Enabled
Necessary cookies are absolutely essential for the website to function properly. This category only includes cookies that ensures basic functionalities and security features of the website. These cookies do not store any personal information.
Non-necessary
Any cookies that may not be particularly necessary for the website to function and is used specifically to collect user personal data via analytics, ads, other embedded contents are termed as non-necessary cookies. It is mandatory to procure user consent prior to running these cookies on your website.
SAVE & ACCEPT
208 shares
208 shares