Tiramisu feels sophisticated but it's really easy to make. This is the first Tiramisu recipe I ever tried.  My brother still claims that it's his favorite Tiramisu.

This tiramisu recipe is probably the first 'fancy' dessert recipe that I learned to make. It is also mostly likely the first time I ever used a double boiler for anything.

I found this recipe many years ago in an issue of Cooking Light magazine.  I've adapted it over the years to make it my own. The original recipe calls for "light cream cheese" and "Cool Whip".  While these two ingredients might give you a few less calories, I'm a firm believer in keepin' it real. I like to use full-fat cream cheese and real whipping cream.

Traditionally, tiramisu is made with a rich custard and marscapone cheese. This lighter version of tiramisu uses beaten egg whites folded into a little bit of whipped cream cheese. This approach yields a lighter and fluffier texture than the traditional recipe. Don't get me wrong, they are both fantastically delicious and I have made them both.

I'm sharing this version of the recipe because there is a lot of nostalgia attached to it.

'Light' or not, 'nostalgic' or not...every time I bring this to this to a party I get several requests for the recipe. It is much-loved by everyone that tastes it.

On a recent trip to San Diego my brother and I were talking about this tiramisu. My husband and daughter were like, "What? Why have we never had this Tiramisu?" Then they kept claiming that this infamous Tiramisu seemed to be merely a myth. In the spirit of proving its existence, I pulled this recipe out again. You could say that their harassment had the desired effect! 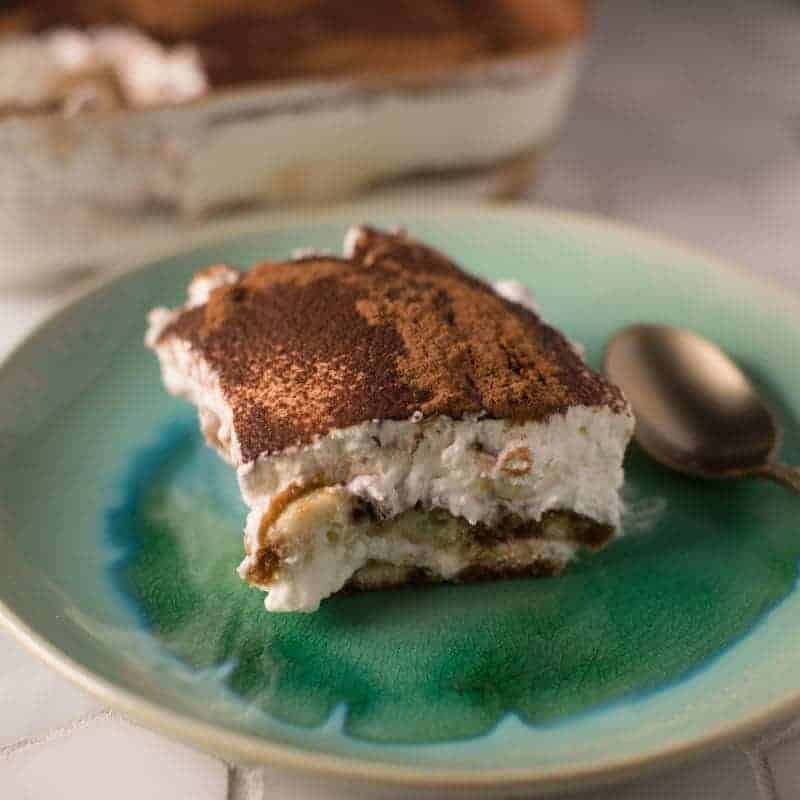 Laura Reigel
I've been making this recipe since high school. It was originally a Cooking Light recipe. I've adapted it over the years to make it my own.
PRINT PIN SAVE SAVED
Prep Time 30 mins
Refrigerate Before Serving 2 hrs
Total Time 30 mins
Course Dessert
Cuisine Italian
Servings 16
Calories 175 kcal

In A Double Boiler:

Calories: 175kcalCarbohydrates: 22gProtein: 3gFat: 7gSaturated Fat: 4gCholesterol: 51mgSodium: 76mgSugar: 13gCalcium: 28mgIron: 0.6mg
DID YOU MAKE THIS RECIPE?Snap a 📸 and share it. Tag me @foodologygeek and don't forget to hashtag #foodologygeek!

This website uses cookies to improve your experience while you navigate through the website. Out of these, the cookies that are categorized as necessary are stored on your browser as they are essential for the working of basic functionalities of the website. We also use third-party cookies that help us analyze and understand how you use this website. These cookies will be stored in your browser only with your consent. You also have the option to opt-out of these cookies. But opting out of some of these cookies may affect your browsing experience.
Necessary Always Enabled
Necessary cookies are absolutely essential for the website to function properly. This category only includes cookies that ensures basic functionalities and security features of the website. These cookies do not store any personal information.
Non-necessary
Any cookies that may not be particularly necessary for the website to function and is used specifically to collect user personal data via analytics, ads, other embedded contents are termed as non-necessary cookies. It is mandatory to procure user consent prior to running these cookies on your website.
SAVE & ACCEPT
12 shares
12 shares