This year I wanted to include a traditional Hanukkah recipe in my Spring lineup.

One of my nutrition clients gave me her family's potato latke recipe. She said it was her favorite holiday treat. I see no reason to wait for a holiday to make a batch of these. I love sharing family recipes with you so here is my spin on latkes. I made them gluten-free so that everyone could enjoy them.

How to make classic latkes.

Potato latkes are easy to make. There are just a few simple ingredients. Traditionally latkes are made with shredded potatoes, onions, and matzo flour. It is often mistakenly believed that matzo meal is gluten-free.

Matzo is derived from wheat and has gluten in it. I had to look it up to find out what the difference was between matzo flour and regular flour. The short story is that matzo flour is subject to stringent processing standards that make it kosher. If you are interested in the full story to check out this read.

To make gluten-free latkes, I substitute gluten-free flour for the matzo flour. If you aren't avoiding gluten, feel free to use matzo flour or even just regular all purpose flour. The addition of a little flour acts as a binder.

What is the best type of potato for making latkes?

The lower starch concentration gives you a crispier result when fried. There is no big secret why french fries are usually made from russet potatoes.

What is the secret to really great latkes?

There are a few crucial steps to making perfect potato latkes.

To get a really crispy potato, you have to remove as much water as you can from the shredded potatoes.

Next, you need to get as much water out fo them as you can. Dump the whole pile of shredded, rinsed potatoes onto a clean kitchen towel. Bundle them up in the towel and then squeeze. Don't be afraid to squeeze too hard. You need to put some muscle into it so that you can get as much moisture out of the potatoes as possible.

After you have squeezed the living moisture out of your shredded potatoes, it's time to add the grated onion and season them.

The only seasoning I add to my latkes is a little kosher salt. I like to keep the flavors simple. Crispy potatoes are delicious so you don't need to add a lot of extras.

Add the eggs and the flour to bind everything together and then get ready to fry them.

What oil should you use for latkes?

My favorite oil for high-temperature cooking is Avocado oil. Avocado oil has a high smoke point and a mild flavor. Coconut oil can sometimes be too coconutty for savory dishes.

Why does this matter? Oils that have lower smoke points can change chemically when exposed to high heat. This chemical change turns an otherwise healthy oil, like olive oil into an oil that causes inflammation in your system.  You've probably heard that you shouldn't cook with olive oil. I don't recommend olive oil for frying at all. Save your olive oil for dressing your salads.

Peanut oil is probably the most commonly used oil for deep frying. Peanut oil is mild in flavor and gives a crispy and nicely browned potato. While I love the results of peanut oil in this application, I don't like the high concentration of Omega 9 and Omega 6 fatty acids that peanut oil is made of.

How to fry latkes.

I find that a large skillet is great for frying latkes. Iron skillets hold their temperature really well. I'm a big fan of Staub cookware. You will want your oil to be somewhere between 360 and 375 degrees. Watch the temperature closely. Frying at the correct temperature will ensure that you get a crispy, golden brown latke.

How to make Paleo latkes.

If you aren't into eating white potatoes, you can still enjoy latkes. This crispy treat is delicious when made with almost any root vegetable. Sweet potatoes and beets both make gorgeous latkes. You don't even need to ring out the sweet potatoes since they are already low in water concentration. Zucchini is another option for potato-free latkes.

How to make vegan latkes.

If you want to keep this recipe vegan, you can leave out the eggs and substitute about ¼ cup of almond milk plus one tablespoon of cornstarch or arrowroot powder. 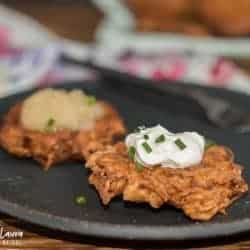 This website uses cookies to improve your experience while you navigate through the website. Out of these, the cookies that are categorized as necessary are stored on your browser as they are essential for the working of basic functionalities of the website. We also use third-party cookies that help us analyze and understand how you use this website. These cookies will be stored in your browser only with your consent. You also have the option to opt-out of these cookies. But opting out of some of these cookies may affect your browsing experience.
Necessary Always Enabled
Necessary cookies are absolutely essential for the website to function properly. This category only includes cookies that ensures basic functionalities and security features of the website. These cookies do not store any personal information.
Non-necessary
Any cookies that may not be particularly necessary for the website to function and is used specifically to collect user personal data via analytics, ads, other embedded contents are termed as non-necessary cookies. It is mandatory to procure user consent prior to running these cookies on your website.
SAVE & ACCEPT
57 shares
57 shares