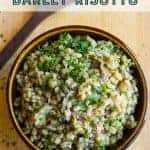 This barley recipe is a hearty and filling recipe that everyone loves! Barley has a pleasant chewy texture and a nutty flavor and makes a hearty side dish that's delicious when served with meat or other roasted vegetables.

This barley recipe is adapted from the California Heritage Cooking Cookbook.

This cookbook is no longer in print, but you might be able to find it in the used book market.

What is Pearl Barley?

There are two common types of barley used for cooking; hulled barley and pearled barley.

Hulled barley has only its outer hull removed, leaving it chewy and full of fiber. Hulled barley is higher in fiber than pearl barley.

Pearl barley is also chewy and rich in fiber, but because it has both the outer hull and bran layers removed, it takes less time to cook. Pearl barley is the best choice for a quick barley recipe.

You can use either hulled barley or pearl barley for this barley recipe. Just keep in mind that if you are using hulled barley, you will need to cook it a little bit longer.

This mushroom barley pilaf is a vegetarian recipe, but you can make it vegan with a few substitutions.

How to cook barley

This barley recipe is cooked as a casserole dish in the oven.

It's best to use a 2-quart casserole dish with a lid to bake this recipe. The lid allows the barley to steam during the cooking. 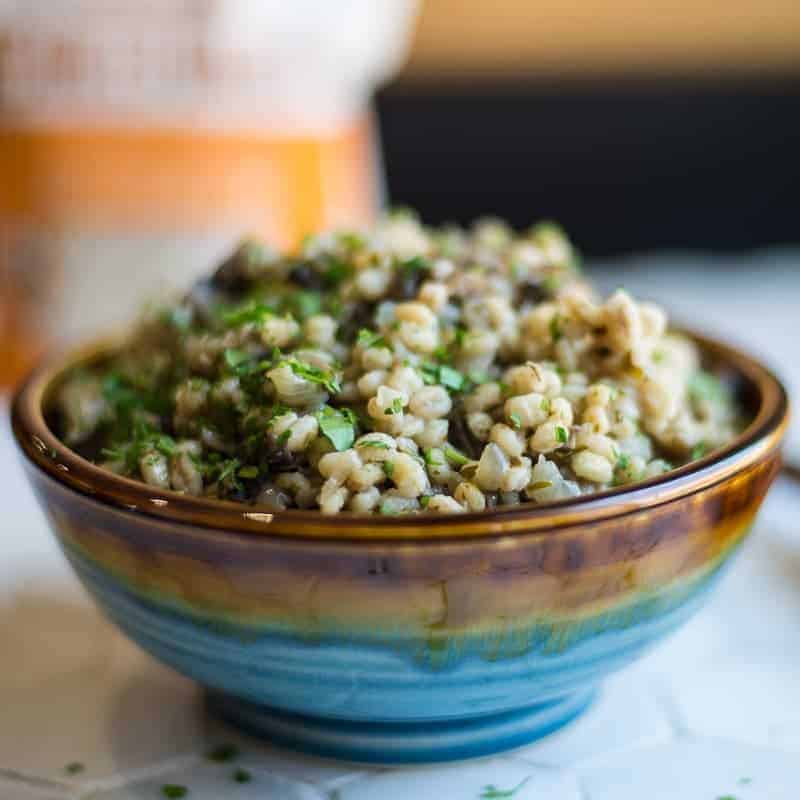 Laura Reigel
This barley recipe is a hearty and filling recipe that everyone loves! Barley has a pleasant chewy texture and a nutty flavor and makes a hearty side dish that's delicious when served with meat or other roasted vegetables.
PRINT PIN SAVE SAVED
Prep Time 30 mins
Cook Time 50 mins
Total Time 1 hr 20 mins
Course Side Dish
Cuisine American
Servings 8
Calories 267 kcal

This recipe originally appeared in The California Heritage Cookbook (now out of print).  Vegan Adaption: Use vegan butter substitute and vegetable broth.

This website uses cookies to improve your experience while you navigate through the website. Out of these, the cookies that are categorized as necessary are stored on your browser as they are essential for the working of basic functionalities of the website. We also use third-party cookies that help us analyze and understand how you use this website. These cookies will be stored in your browser only with your consent. You also have the option to opt-out of these cookies. But opting out of some of these cookies may affect your browsing experience.
Necessary Always Enabled
Necessary cookies are absolutely essential for the website to function properly. This category only includes cookies that ensures basic functionalities and security features of the website. These cookies do not store any personal information.
Non-necessary
Any cookies that may not be particularly necessary for the website to function and is used specifically to collect user personal data via analytics, ads, other embedded contents are termed as non-necessary cookies. It is mandatory to procure user consent prior to running these cookies on your website.
SAVE & ACCEPT
87 shares
87 shares